Dutch Missionary Wives in Indonesia during the Colonial Period

In this weekly Forum, held jointly by CRCS and ICRS, guest speakers, professors and students present their ideas about a variety of topics in religion and culture. On 1 March, Maria Inggrid Nabubhoga, who is at present doing research in the course of the project ‘Indonesian Mirrors’, spoke at the Forum about the involvement of women in the Dutch Protestant mission in former Dutch East Indies.  Here she reflects on the presentation, discussion and reactions of the participants.

“The topic of this presentation is the topic of my MA thesis when I studied at Leiden University in the Department of Colonial and Global History. My research explores gendered notions in missionary practice and points out the lack of attention on the studies of women in Christian mission within the framework of the Indonesian colonial history. My research is an attempt to make women in Dutch Christian mission in Indonesia visible. It fills a historiographical gap in the studies of mission history in Indonesia during the colonial period. 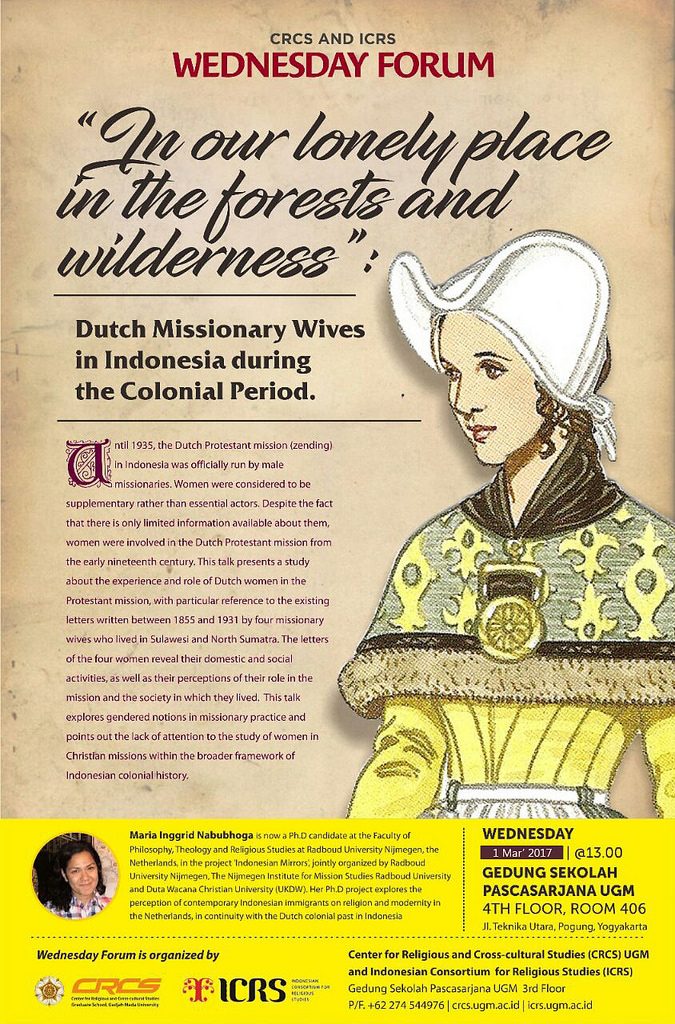 The presentation was attended by students, lecturers and researchers of not only CRCS and ICRS but also other study programs from UGM and other universities. We had a great and lively discussion. The audience asked various questions such as: Did the wives actually perform as missionaries when their husbands were not in the mission post?; Was there any education/training for the wives before they came to the mission field?; Did the women join the mission because of their individual motivation like in the case of American missionary or because of their marriage or because of other reason?; Were the terms “heathens” and “uncivilized” only used among the missionary circles or also in the public sphere during the period?; Were there any stories about scandalous/sexual incidents?; How was the relationship between a missionary family with other Europeans (colonial administrators, etc) in the area?; Did the local people maintain their relationships/communications/friendships with the missionary family after they left the mission post?, etc.

Several audience expressed their appreciation because this topic is “new” for them and they have never heard of or thought about the role of missionary wives in Christian mission in Indonesia. One student expressed her reflection on the relation between a pastor and his wife. She said there are certain things expected from a pastor’s wife. When a pastor is not at home or not available, the wife has to act in his position in dealing with members of the congregation.

After the talk two students came to me and told me that they were inspired by my presentation and they would like to study further about women in Christian mission in Indonesia.

I am very happy that my presentation more or less became an “eye opener” for the audience because most of them did not know or never thought about the involvement of women in Christian mission in Indonesia during the colonial times. One of the challenges for Indonesians in doing a study like mine is the skills to read Dutch archives. One needs to be able to read the missionary archive which was written in old Dutch.”

The Center for Religious and Cross-cultural Studies (CRCS) at the Graduate School, Gadjah Mada University, Yogyakarta, is Participant to the Netherlands-Indonesia Consortium for Muslim-Christian Relations.