The Gift of Mother Nature to the Kendeng Mountains

Women at the forefront of saving the ecosystem of their land

On November 26, 2021, the Netherland Indonesia Consortium on Muslim-Christian Relations (NICMCR) organized a webinar under the topic “Meet the Faces of Ibu Bumi: Women’s endeavours in saving their ancestral land in Kendeng”. The topic highlighted the the struggles of local peasants to the conversion of areas around the Kendeng mountains to mining and industrial zones and the building of a cement factory. The land is inhabited by peasants who have been working their rice paddies for generations.  Cement factories would destroy the rice paddies and threaten the sources of clean water below the mountains. Water, used for drinking, domestic use and farming. Peasant women later organized themselves into a movement that made peaceful protests and appealed for saving their ancestral land from being used as a site for the building of a cement factory.

Prof. Dr. Frans Wijsen of Radboud University in the Netherlands opened the webinar with raising the issue of women’s underrepresentation at the COP 26 in Glasgow where most of the world leaders attending the conference were men. He also alluded to the fact that women are the most affected by the environmental degradation and that they are the ones who are very active in environmental efforts. However, they are rarely involved in high-level talks or discussion to salvage the mother earth from its foreseen human-made destruction. Moderator, Marius Koelink mentioned the importance of listening to indigenous voices who experience direct impact of environmental debris and who are at the forefront in the struggle against ecological degradation. 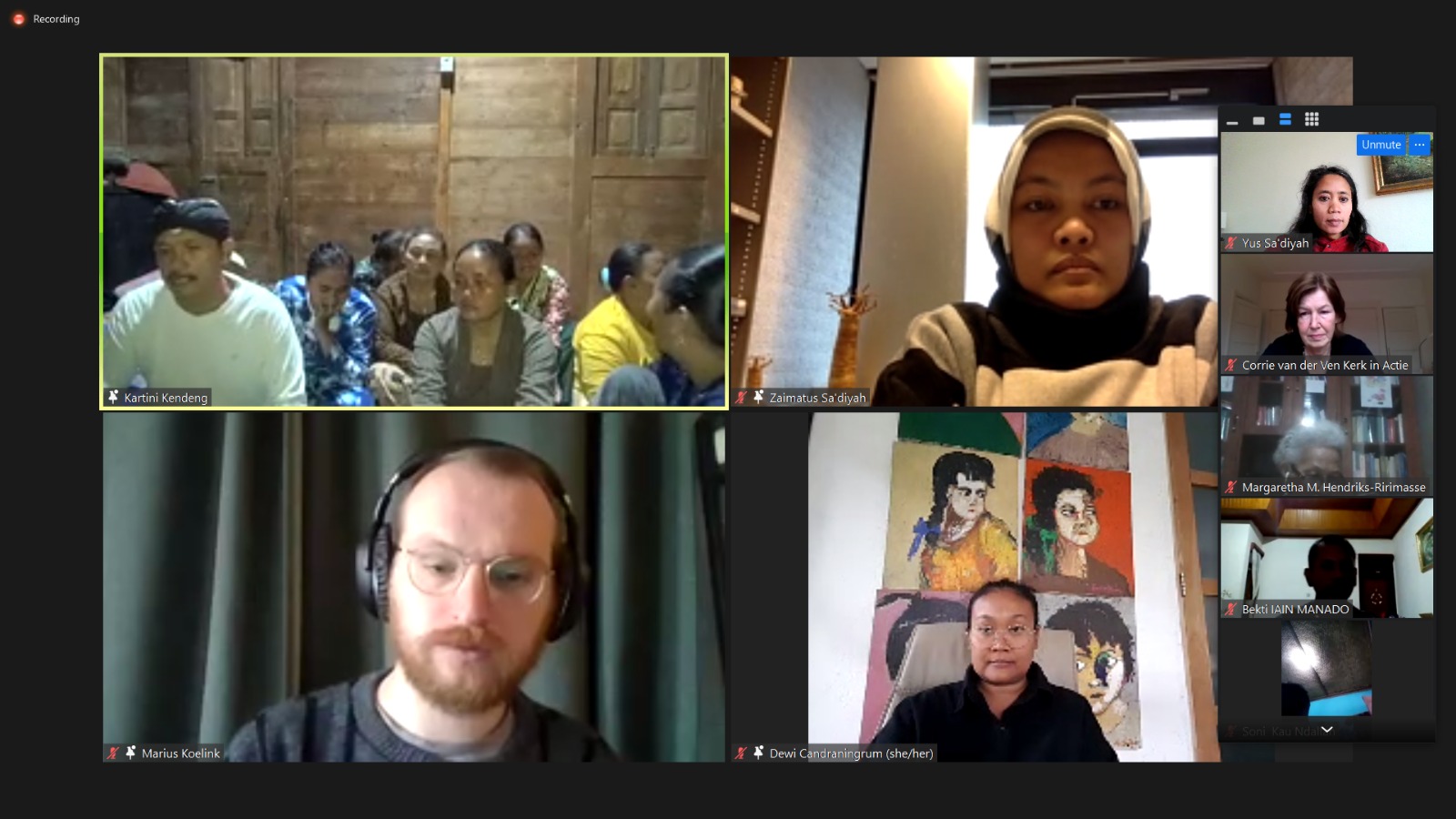 The webinar featured the so-called ‘Kartini Kendeng’, a group of nine female peasants, who held several protests, one of which in front of the Merdeka Palace. They were later referred to as the Kartini’s from Kendeng after the name of RA Kartini, who symbolizes the Indonesian women’s emancipation. They are part of the Jaringan Masyarakat Peduli Pegunungan Kendeng (JM-PPK, People’s Network for the Kendeng Mountains), a CSO that actively opposes the cement construction of PT. Semen Indonesia. Mr. Gunritno, leader of the JM-PPK, who was also present, was proud that the movement consisted mostly of women, in contrast to the male faces shown at the COP-26 in Glasgow. He storied how the women were the main actors in the endeavours of the movement and in fact the ones taking the lead and initiative.

Sukinah (Kartini Kendeng) told about the developments which happened in the area of Rembang. Although they have won their case in court, sadly enough the cement factory is still operating in Rembang. Gunritno also added that there were a few victories as told by Sukinah, but factually there was no follow-up on the court’s ruling. The ruling was supposed to revise the current provincial spatial regulation. The group was able to have an audience with the vice minister and called for the revision of the provincial spatial regulation. However, until now there is no implementation at all by the government. In fact, the violators of environmental laws are getting lenient punishments.

The next speaker was Dr. Dewi Candraningrum (Jejer Wadon Studio). She has written many articles on ecofeminism, gender and authority, failing practices in Indonesia, gender and human rights. Dewi mentioned that the policy towards the concept of economic growth in development is the factor that drives Indonesia to make it easier to facilitate the building of factories. She also mentioned that the actions of the Kartini Kendeng are a form of resistance to the dominant powers. Therefore, mainstreaming the gender and ecology discourses in Indonesian universities is highly crucial. It is a fact that many universities in Indonesia endorse the licencing of businesses that ravage the environment. Further, she also mentioned the uniqueness of the Kartini Kendeng’s protest with its peaceful nature. Their protests never resulted in violent actions like many other protests. They even cooked and prepared meals for the police officers, for people in surrounding areas, and even for the governor when they did the protest in front of the governor’s office. This peaceful nature of their protests made them a media darling.

The next speaker, Zaimatus Sa’diyah of Radboud University presented material from an Islamic perspective specifically under the theme of Islam and ecofeminism. She reiterated that the intention of the Kartini Kendeng was solely to safeguard the protected Kendeng area. Since Kendeng is a nature conserved area, the erection of buildings or industrial plants is not allowed for environmental reasons. However, for the sake of economic progress, this rule was violated, allowing construction to proceed.

During her presentation, a musicalized poem was sung collectively by Zaimatus and the members of Kartini Kendeng. The poem itself was composed by Gunritno. It reflected the supposedly intimate connection between human beings, the nature, and God. The poem, she said, was able to unite different traditions in Islam and beyond. The interesting part is also that this prayer was adopted from a Sedulur Sikep prayer (indigenous or local teachings on the interaction between human beings and the nature). The incorporation of the Shahadah statement into that prayer elicited backlash from a certain Muslim group as Sedulur Sikep was regarded “unislamic” and such combination in the poem was deemed unacceptable. This rejection seemingly denoted Islam’s – perceived – incompatibility with the concept of “mother earth”.

In response to such proclivity, Zaimatus explained how Islam views the concept of “mother earth”. Several Quranic verses allude to the maternal images of the earth. The word “earth” in Arabic has a feminine noun. It is because the earth has feminine traits that the word possesses. The earth is also described as a home, a resting place, a place that we call home. Islam also acknowledges that we came from this earth and to this earth we will return.

Concluding her presentation, Zaimatus said, that in response to some groups’ refusal to use the term “ibu bumi” (mother earth), she has offered an alternative concept called “ibu kosmik” (cosmic mother) which has similar meanings.

At the Q&A session Bekti Lantong (IAIN Manado) asked if there was an NGO that offered or provided advocacy for the Kendeng case. He also asked about the forms of such advocacy if there were any. One of the members of Kartini Kendeng mentioned that several NGOs and independent lawyers advocated for them. However, as Gunritno said, they were very careful in selecting NGO’s because as became evident in other regions, some NGOs were ensnared in an internal conflict of interests. It must be understood that the problem in Kendeng is an environmental one, which calls for collective action. That is why they carefully filtered the NGOs who would like to contribute advocacy for them; they must be the like-minded NGOs with zero vested interest. They also refused to say that the NGOs “told” them “what to do”. The NGO helped and walked with them, but the strategies of advocacy were crafted by the Kendeng fighters themselves, determining their own fate.

Yus Broersma (PCI NU Belanda) asked whether large religious organizations also contribute to support Kartini Kendeng. Gunritno acknowledged that a large Islamic organization gave their support to their struggle. However, at the implementation level, things did not always run smoothly. But top figures of this organization personally supported and ensured that their support would trickle down to the affected groups. Some campuses also supported their struggles. Supports also arose from other religions like the Protestant and Catholic Christianity. The Archbishops of Semarang and Jakarta gave their support to the movement as well.

The moderator asked a question regarding the possibility of mobilizing the international community to boycott the mining products from these companies in Kendeng. Dewi agreed to that idea.  International media especially the ones from Germany already did a great deal of coverage about the Kendeng struggles. They demanded their German friends to voice up their concerns in Germany, since one of the investors of the companies in Kendeng was himself a German company.  The international community should be made aware that it was important to trace the manufacturing or the creation of a product. Questions should be raised, like “where did this product come from?”, “did its production involve actions that violated human rights?” People should seriously ask those questions to ensure fair practices in the production and distribution of goods.

Another issue was raised by the question, why the discourse on ecological and environmental theology seems unpopular and is rarely voiced in Muslim circles. Zaimatus admitted that the discourses linking religions and environment are very slow in progress and that there is a lack of sense of emergency to the cause.  She mentioned the wudhu, washing ritual before performing prayers in Islam. It is an example that we even need water to practice our faith. However, such practices are rarely associated with ecological awareness and efforts to keep water clean. Right now, several Islamic communities have risen to the equation to be at the forefront of safeguarding the environment. In Christianity, we see the concept of “green theology” as an ethical theological offer to theologize against natural degradation.