NICMCR Pokja Gender Coordinator for Indonesia, Christine Hutubessy, welcomes all participants, moderator and speakers and explains the aim of the webinar. She introduces Riska Dwi Agustin (lecturer at the Islamic State Institute Samarinda, who will moderate the webinar.

Corona and women’s oppression in the Netherlands (NL)

The moderator introduces the first speaker, Shirin Musa, founder /director Femmes for Freedom, an NGO defending women’s rights. Shirin Musa was the first Dutch Muslim to succesfully pursue a religious divorce in a Dutch civil court. She introduced the concept of marital captivity, a situation in which women are unable to terminate their religious marriage.

The presentation starts showing a short video about an example of a forced marriage in captivity in the Netherlands. She explains that the issue affects many migrant women in the Netherlands, while the marriages themselves, often happen outside the Netherlands, in the respective home countries, so it is a transnational violence.  Another side of marital captivity is that the women are kept within their religious marriage against their will, since the men often do not cooperate when they want to divorce. Women are also not allowed to have their own money and bankaccount and the husbands or in-laws often lock them up in their house, they are often prone to domestic violence, sometimes even leading to death.

Nowadays, migrant people in the NL are doing much better, they have consumed higher education, have a higher percentage in labor participation and reached a higher social level. However, migrant women still have more sexual restriction than non-migrant women. When it comes to abortion, women with migrant background have more abortions than the non-migrant ones.

This pandemic actually made it easier to explain about the isolated situation to the non-migrants in the Netherlands. “And in this pandemic, we all know what lock down means. When I talked to policy makers: “Hi, we all know what the lockdown is and these women, who are isolated, are living in a permanent lock down”, she exclaims.

In the discussion, many questions focus around the cultural and religious roles in approaching this issue. Shirin Musa emphasizes the problems one encounters with this type of approach. For instance, in NL legally rape is a crime, but according to religious law, such as in Pakistan, rape does not exist in marriage, the wife should be obedient to the husband. Therefore she never uses religion as an instrument to combat violence against women, but instead uses views on human rights.

Although a lot of progress has been made, collectivism within the community is still more dominant than individualism. Thousands of muslim girls undergo virginity or hymen reconstruction surgery, before they get married, because according to their culture or religion, they must be virgin to enter marriage, whereas such thoughts are totally strange to Dutch girls.

Addressing the contradiction between Indonesia and the Netherlands regarding the sequence of civil marriage and religious wedding, Shirin Musa argues that civil marriage is very important. Religious weddings are not registered and therefore a man can have another wife or wives. It is important for Muslim women to know their rights in the Netherlands. The Dutch government and Femmes for Freedom are not against Muslim marriages or religious marriages at all because religious marriage is deeply rooted in each religious tradition. But the law is very clear for people to go to civil court and established their civil marriage. And if an Imam (religious leader) does not check whether a civil marriage is established or not, it is a criminal offense because it is his responsibility. Exactly on this issue, there will be a voting in the Dutch parliament tomorrow because one political party introduces a law that enables everybody (man and wife) to have religious marriage only. She thinks, that this is a very dangerous development, especially for victims of forced marriages and marital captivity.

Shirin Musa argues that even though in a very rich country like the NL, notwithstanding many privileges, there are marginalized women. Therefore, it is our duty to be there for them, not only in the NL but together, with colleagues, also from Indonesia. She is happy to meet colleagues from Indonesia and looks forward to opportunities to learn from each other. We need a coalition among women because women’s rights are human rights.

LGBTIQ and their struggle during the pandemic

In his findings about the LGBTIQ communities, Stephen Suleeman, lecturer at the Jakarta Theological Seminary, pastor at GKI and recently Winner of the Champions Award in the category of Religious Leader (https://cutt.ly/bhOnVuG) comments, that they are treated as people with social problems who need help and rehabilitation to be acceptable to society. Especially transwomen are more miserable, due to their appearance, which is easily recognized. Many of them work in beauty salons or in the catering business. The rest end up standing on the road to sell their bodies, the more lucky who can buy cellphones, join online prostitution.

Stephen Suleeman has conducted many interviews among them. He underlines the factor of trust, which is the key to connect with LGBTIQ people. Never betray that trust by telling their stories to other people, unless they want their stories to be told and heard. Another factor is acceptance. To become friends with them, one has to open his heart and mind and accept them as who they are.

In his presentation, Stephen Suleeman elaborates on five cases, based on these interviews. These five transwomen and transmen come from different backgrounds, different areas and different religions: May, a Catholic Papuan transwoman living in Flores, who is now, elected as house representative; Reza, a Sundanese Christian transman from Bekasi, West Jawa, whose situation is not as bad as many transwomen, since he can maintain his life without people suspecting his status; Sisca, an Acehnese Muslim lesbian, who had to accept a job with the government, which often clashes with her conscience as former activist demonstrating against the government; Christina, a Chinese Catholic Indonesian transwoman from Jakarta, who once worked simultaneously as Sunday School teacher and as prostitute in the area of Taman Lawang, a situation that made her feel bad; and Orchid, a transwoman from Eastern Sumatra, who is now starting to make her third film.

Viewing the lives of these people, Stephen Suleeman concludes that since the pandemic, many LGBTIQ persons struggle in order just to exist, especially since many beauty salons and catering businesses, their main places of work, closed down. But also, one thing emerged in the life of these people: a very strong solidarity in their communities. The more fortunate collect money from their savings to distribute among those who are less lucky. 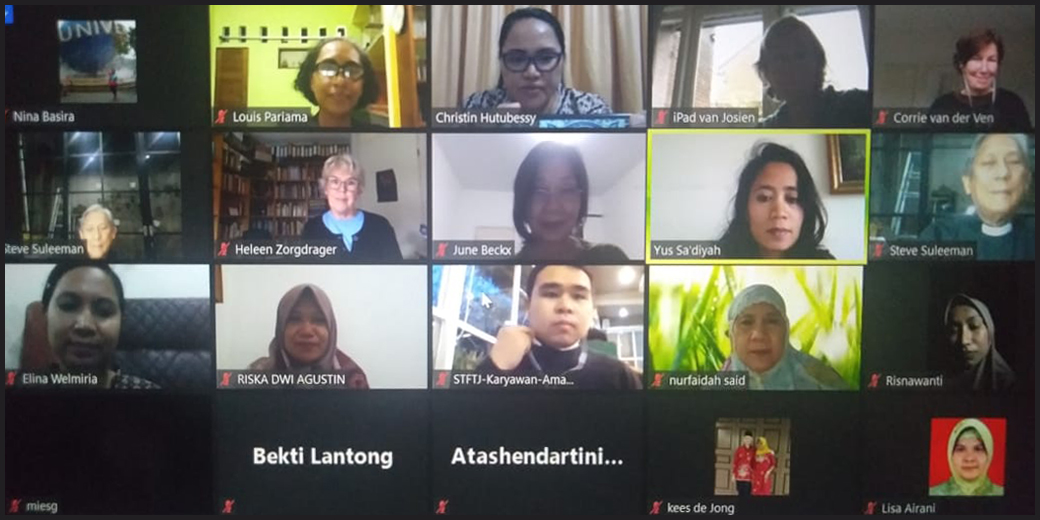 In the discussion, Stephen responded to the question regarding success stories in the LGBTIQ communities. He names the example of Oscar Lawalata who came out in public. Being a famous and expensive designer, she is looked up by people and is not mocked as a transwoman. That shows that people do not care when you are rich and successful!!. In contrast there is the story of a transgender who was accused of stealing a cellphone and burnt to death….

Why some of them return to being heterosexual, could have many reasons, although many do not know exactly why. The question is if they are happy in their ‘new’ old situation??? Many of these so called success stories are often cause to put the accusing finger to other LGBTIQ people.

How is the church dealing with this issue? A participant of this webinar who comes from a church in Timor narrated about a pastor in her church who came out in the media which became a big controversy. Because of that action, his pastorstatus is now temporarily suspended to undergo pastoral care first. Stephen Suleeman thinks that there are many gay and lesbian pastors, who hide their sexual orientation. He knows of only one church who is more open to LGBTIQ issues.

As for the communities themselves, many of them felt rejected by their faith communities and left their faith, to become agnostic or atheist. Since Stephen Suleeman started his journey advocating for them, some returned to their former faith, reading the Bible, or practicing sholat and doing the fast.

With the pastoral letter, published by CCI (PGI) in 2016, little by little, PGI memberchurches have started to learn to explore this LGBTIQ issue and several churches have tried to accept them. For example, in the church order of the Maluku Protestant Church (GPM) LGBTIQ people are considered equal to heterosexuals, who have to treat them equally as well. 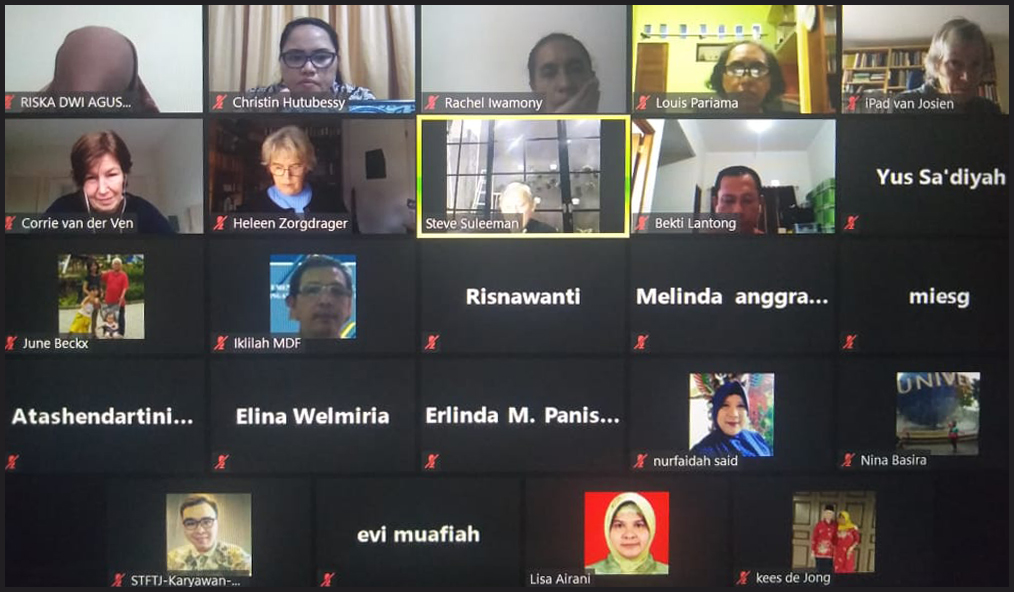 Stephen Suleeman concludes by saying that the struggle of our LGBTIQ friends is far from over. The Indonesian government is very homophobic. They are still treated as a ‘social problem’ that has to be ‘rehabilitated”. And religiously, they are considered as sinners who need to repent and be healed. The struggle still has a long way to go.

Yus Broersma, the Pokja Gender Coordinator for the Netherlands, closes the webinar with the invitation to all participants, to join NICMCR or visit the website (www.nicmcr.org) and hopes to welcome all in the Consortiums’ next meeting or seminar.

This is our belief around here GAME ON! Playful Religious Education