The Role of Women in Extremism

Essay on NICMCR Webinar dated on September 28, 2021
by Amadeo Udampoh 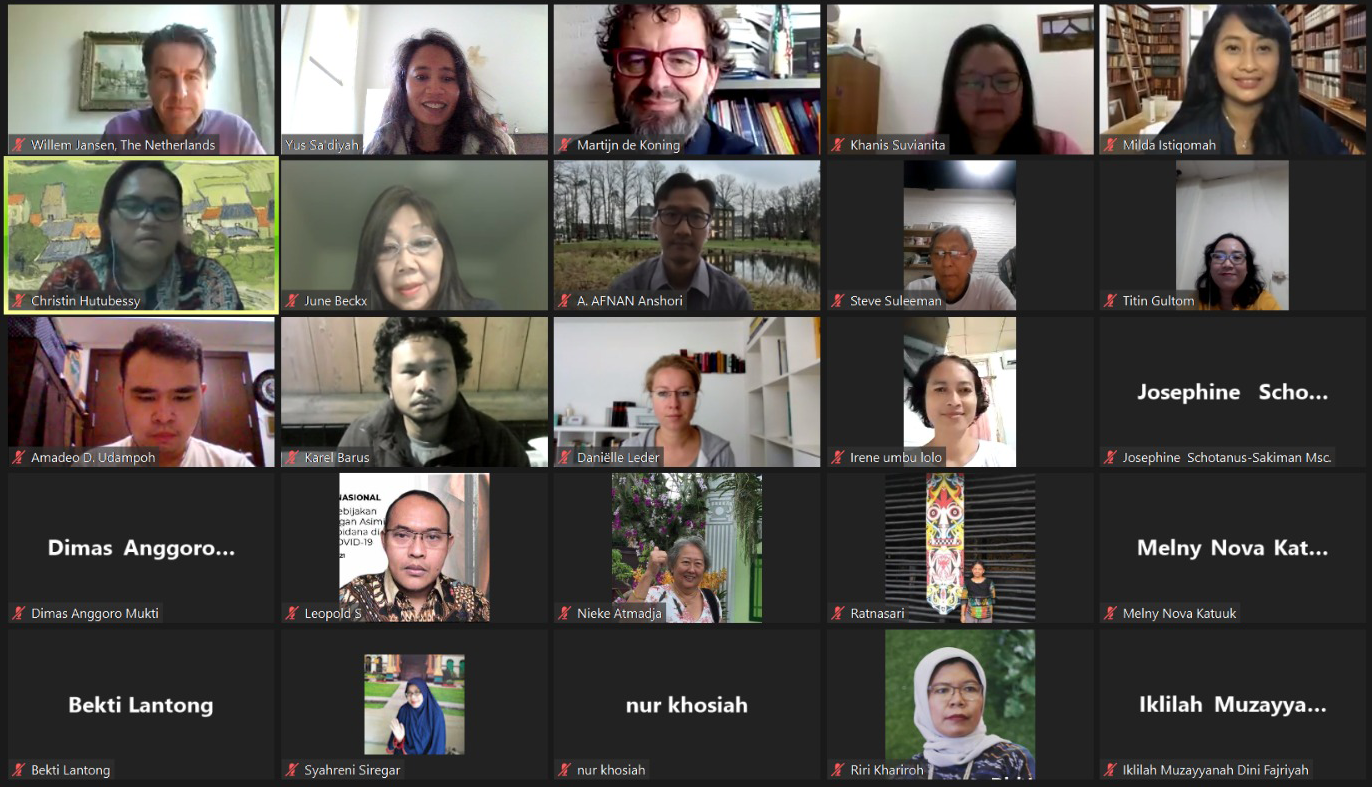 On September 28, 2021, the Netherlands-Indonesia Consortium on Muslim-Christian Relations (NICMR) organized a webinar under the theme “The Role of Women in Extremism”. The webinar was moderated by Khanis Suvianita, a Ph.D. candidate at Indonesia Consortium for Religious Studies at Gajah Mada University, and featured two speakers, namely Dr. Martijn de Koning of Radboud University and Dr. Milda Istiqomah of Brawijaya University. The webinar covered multidimensional aspects including the lack of gender dimension in responding to religious extremism.

In her opening remarks, Corrie van der Ven, a member of NICMCR Steering Committee proudly described NICMCR as being a light yet very active network, proven in the many online discussions conducted by the group. In her remarks she also appreciated the participants and mentioned the upcoming anniversary of the NICMCR. She stressed the willingness and the need to know each other’s perspectives, especially when it comes to Christianity and Islam in Indonesia and the Netherlands. To that extent, we should rewrite our common history together.

Based on his research between 2010 and 2014 on militant activist networks in Belgium, Germany and the Netherlands, Dr. Martijn de Koning discussed the topic of “Dutch Muhajirat”, in which he raised not only the issue of European women’s role in the building of Islamic state, but predominantly the question of repatriation which has been heatedly debated in the EU countries related to those who were once partaking in extremist movement but later on wished to return to their (Western) home countries.

Martijn elaborated how women of Dutch nationality identifying as mujahirat in areas controlled by ISIS, were involved in terrorism and how was their involvement perceived in academic studies then and now. Within the Dutch context in the 1960s and 1970s, women did not play a significant role in extremist movements. However, it did change, in the years 2000-2004 a network was established which included 12 women. They were more active in endorsing, promoting extremist causes and even executing extremist violent actions. Three of the twelve women were even seen as influencers; they wrote for the network, they became speakers, and played several other pivotal roles.

This reality altered the academic discussion on women’s involvement in extremism quite significantly. In the past, the discussions situated women as naïve romantic and victimized figures that were fooled, forced or manipulated by their (male) partners who put them in extremist groups. Now, following the rise of ISIS, discoveries of women being more active agents in extremism has refocused the discussion on examining the women’s active roles. ISIS shifted the paradigm by showing that women were actually part of the recruiters and propagandists for the ISIS’ cause. According to estimation of the AIVD in July/August this year, 105 of which 2/3 is female, are in Syria in detention camps and with jihadi groups and 25 are in Turkey. The majority are children, half of them under 4 years old. Many already escaped from the camps and jihadi groups and we do not know their whereabouts.

On repatriation, the Netherlands take a rather firm stance; denying their entry. The reason was more of a security one, they were seen as national security threat impossible to be reintegrated into society. Fear was escalating that they would damage the peaceful social fabric of the Netherlands society. However, AIVD stated that controlled repatriation is necessary, also for security reasons. Despite of Netherlands’ bold refusal to repatriate Dutch ex-ISIS followers, EU countries are still divided on this issue. The discussion is focused on the repatriation of women and children, men are no subject in this. Belgium, France, and Denmark have in fact repatriated several women and children, with most of them being orphans. Usually, upon returning to their countries, the women were seen as irresponsible mothers and terrorists unable to reintegrate to the European societies. Counterargument is that based on international human rights, the Dutch state is obliged to repatriate children and women.

Milda began her presentation by highlighting some terrorist cases whereby women played a significant role in the acts. During the period of 2000-2017, there were 11 women being involved in terrorist activities in Indonesia. However, in the years 2018-2019 the numbers increased over 100%, reaching 28 people. The convicts are usually sent to prison with 308 years of prison time for the women. In the year 2000, the role of women in extremism was less known, with them being behind-the-scene operators like facilitating the operations of the terrorist groups and merely ideological supporters. Now, they take up more visible roles like committing suicide bombs, becoming active combatants, fighters, and providers of weapons and bomb assemblers.

Milda also reviewed counter-terrorism approaches in Indonesia by looking at our current regulations which lack a gender-based approach. The inclusion of women and gender mainstreaming perspectives are often overlooked in counter-terrorism efforts, not only in the legal and regulatory aspects but also in the criminal justice system.

On the ground, agencies involved in counter-terrorism lack of gender dimension and female personnel. The Detachment 88 is found to have always resorted to masculine approaches and tend to generalize the hard solution for all terrorist cases. The National Counter Terrorism Agencies also lack female personnel that are experienced in handling terrorist prisoners. The National Commission on Violence Against Women also has limited involvement in dealing with this issue.

Milda preliminarily concluded that women in Indonesia are subjected to gendered experiences based on assumptions about masculine and feminine roles as they relate to economic, political, social, and cultural realities. Women’s rights are often neglected, and gender dimension tends to be overlooked in policies and legal framework of counterterrorism. Lastly, the government has no special measures and tactics in handling cases where women are involved in terrorism. Women and men are motivated through different perspectives. Policies, therefore, should not be based on stereotypical assumptions only concerning men, but should take into account these differences, which portray a more realistic situation on the ground.

At the discussion afterwards, one of the questions centered upon the underlying cause of Dutch women’s involvement in extremism.

Martijn responded that there could be some family ties within extremist network that the Dutch nationals being involved there might have family members in the organization or network. He added that lots of militant extremist networks had strong family ties. Another reason is that the average educational level of Dutch women are higher than the educational level of men. That is why when some Dutch women get involved in terrorist activities, they tend to play more active leading roles. Also, they see the groups as a space for empowerment.

Also responding to the question of possible consequenses for Netherlands and other countries if not readmitting ex jihadists, Martijn argued that the denial to repatriation is mostly based on, often proliferated, fear of them being a national security threat. Europe or any country, therefore would foster a breeding ground for radicalized religious groups and worsen the marginalization of those ex-jihadists who are already in marginal circumstances, especially if we look at the demographic that shows women and children being the main populational cohort living in Syria.

A participant was curious about the possible ways the Indonesian government could use to increase awareness of the need to include gender dimension in counter-terrorism measures. Milda admitted this is a hard practical question that entailed our attention. The first thing, according to her, was raising the awareness of the importance of gender dimension, which is quite challenging since the awareness itself emerged only two or three years ago. However, the good news is that the Indonesian government is now trying to integrate gender dimension as an approach to respond to terrorism involving women. Milda added that the next important question is actually how to change the paradigm of the officers, even the female ones, who handle the issue. But of course, there is prospect for change to happen, proven in the openness of the government and key agencies to suggestions and possible solutions.

Those interactive and stimulating exchanges between the speakers and participants ended the NICMR webinar on September 28, 2021. Pokja coordinators Christine Hutubessy and Yus Broersma closed the webinar after all the participants took picture together on Zoom.

Reading Challenging Texts in the Holy Scriptures Innovation for Sustainable Development Goals: Education and Research Collaboration Towards the Future