Christine Hutubessy, Coordinator POKJA Gender and Religion NICMCR, opened the seminar. She expressed the hope that this seminar will offer an occasion for fruitful discussion in which we can learn and share together, on the basis of the presentations on the situation of child marriage and child marriage prevention. She welcomed the participants, among whom, two speakers came from the Vrije Universiteit Amsterdam, the Netherlands.

Aside from the social environment, which is very influential on (Muslim) marriages, other aspects like honor and dignity, are often the cause of these kind of forced or arranged marriages. The question is therefore: should arranged marriages always be considered as forced marriages? What if the children agree to the arrangements? Whereas her Dutch friends’ opinion might be opposite to the opinion of her Islamic friends, in her experience it is very difficult to draw an exact line between forced marriage and arranged marriage.

In all cases mentioned above, the children themselves are often not heard or not heard enough.

From Islamic perspective, usually the hadith referred to is related to the marriage of the Prophet Mohammed to Aisha. There is however, no hadith that tells about the Prophet’s words that he married Aisha at the age of the child. In terms of substance, many hadiths were written long after the life of the Prophet and can therefore be problematic. Many differ from the historical facts, there are even historical references in which Aisha would have been 20 years when she first had sexual intercourse. This is one perspective that is certainly not approved by those who support child marriage. The Islamic legal marriage agreement (akad nikah) should also be a topic to be reconsidered:  there is jurisprudence (fikh), stating that in marrying off a daughter, responsibility is transferred from the father to the husband. But women are not commodities!

Some aspects Iklilah deemed important to be considered: 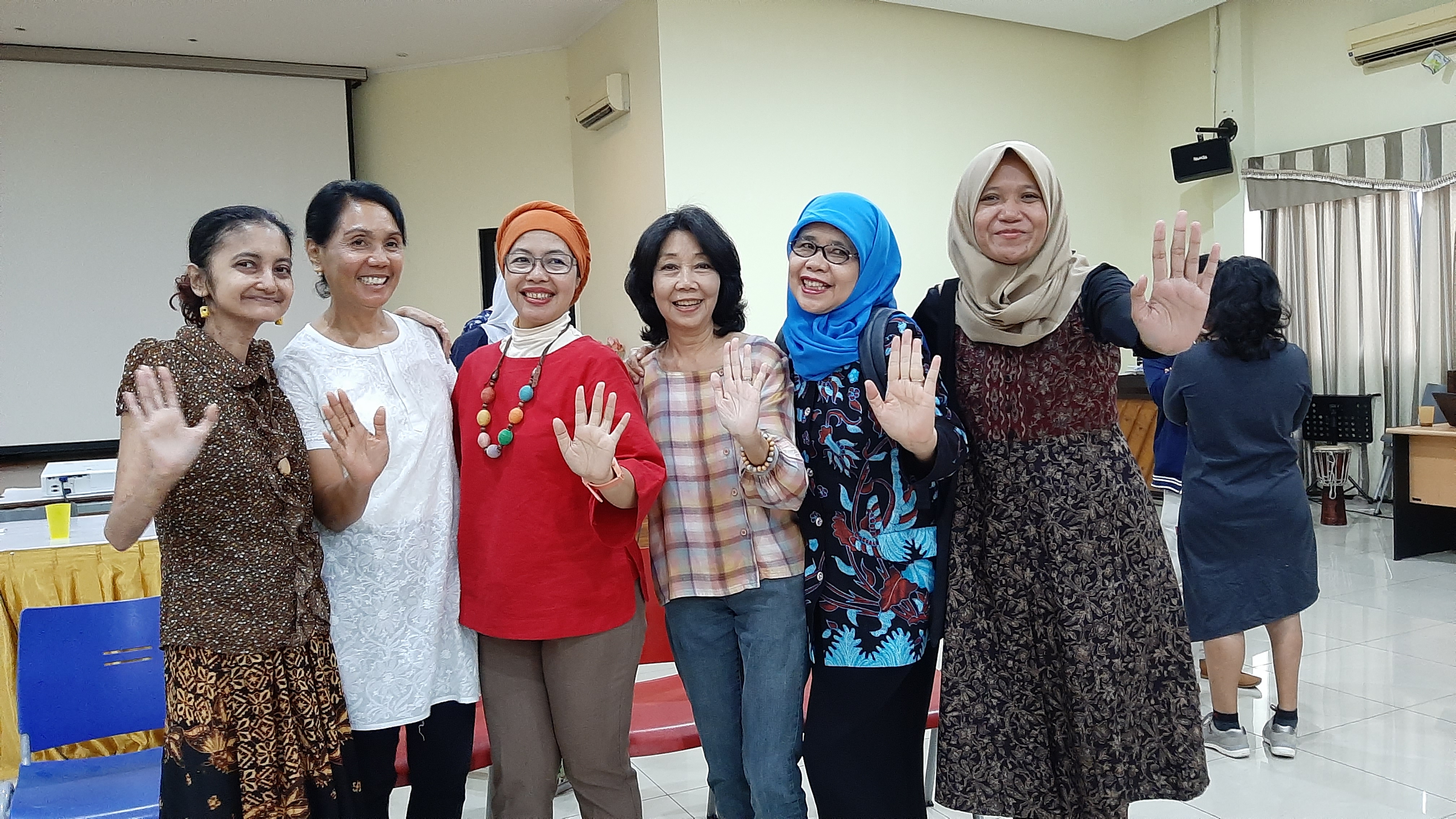 During the discussion, Rosidin, director of the Fahmina Foundation, stated that we must admit that child marriage takes place outside the interest of the child while religious statements are there only for legitimacy. Another obstacle is the dualism of law. There is a prevailing legal system, but the people are still influenced by other “laws” such as religious thoughts. He posed the question what the strongest factor is causing the high rates of child marriage? Regulations perhaps or culture, or people’s views? For our advocacy strategies and objectives, the answer has to be taken in account in order to aim at the right target, namely the groups of people / communities who are really in need of advocacy.

According to Srdjan Sremac, Assistant Professor at the Faculty of Religion and Theology, VU Amsterdam, poverty and gender inequalities are more related to child marriage practices in certain religions. In Burkino Faso and Ethiopia for instance, child marriage is practiced by both Christians and Muslims. On the other hand, there are also examples of how religious leaders and civil society collaborate to prevent and reject child or forced marriage in certain African countries. In terms of culture, an interesting incident in Serbia tells about a 15 year old Romani (Roma) girl who became pregnant. The case was brought to court, but the judge ruled the adult man who made her pregnant, innocent. The judge’s reason was that the incident was not a problem to the Romani culture even though it was legally wrong. This shows the complexity of the relationship between religion, culture and law. In relation to legal matters, there are cases of arranged marriages which are associated with migration. In this way, migrants obtain visas more easily to come to Western Europe through arranged marriages.

In preparing his talk for this seminar, Srdjan discovered that until now, there have not been any serious research on this issue. Therefore he proposed to look for possibilities to conduct cross-science and cross-country research on child marriage and forced marriages.

In addition to cultural and economic factors, the development of science and technology enhance free-sex lifestyles which are not accompanied by adequate (sex)education. Through their mobile phones children can easily have access to sex or pornographic content. Due to the patriarchal culture, women are vulnerable to discrimination. Girls who get pregnant out of wedlock have tarnished the good name of the family and must be married. Economically, marriages bring expensive belis from the male’s families, which will considerably improve the economic situation of the parents and family.

Legal factors are hardly understood or comprehended, people are not aware of human rights, women and children rights.

Yusak also elaborated on the negative impact of child marriage. Beside suffering from psychotrauma, they are often prone to domestic violence. Because their education is terminated, they have no chance to build any career. To many victims of child marriage, all these factors leave them no other choice than to become migrant workers.

Elina Welmiria Otu (Eastern Indonesian Women’s Network / JPIT) elaborated on the Biblical view by bringing forth some passages in the Bible which illuminate child marriage. One such story on a practice of marriage at a very young age she found in the book of 2 Kings, the story of Ahaz who was allegedly married at the age of 11. The writer of the book 2 Kings, described Ahaz as an evil person before God, who even sacrificed his own son in the fire. There are several reasons leading to the kings of Judah to sacrifice their own children. Also, the book of Kings was written in the time of Josiah’s Reform, so as to discredit other kings who worship Yahweh and foreign gods as well. Therefore readers are invited to understand the context of the writings first before judging the kings who offered their children. In the case of Ahaz, offering children could have been a way to avoid conflict with Assyria, but it could also have been because he married too young. Also today, we see that children of couples who married at an early age, are often neglected and receive less love from their parents.

Elina connected the book of Numbers 31 with the multiple layers of trauma: the commands in Numbers 31: 17-18 relate to the practices of the previous wars at that time. Wars leave physical and psychological trauma that cannot easily be erased. Today, examples of child-victims who are forced to marry happen to those who are enslaved by ISIS in the Middle East. This is a serious crime against humanity and gross violation of Human Rights. On the other hand, the situation in East Nusa Tenggara, NTT was not motivated by war. But the economic crisis that befell poor families can induce parents to give their children away to men.

With respect to the role of the church in preventing and dealing with the child marriage, Elina explained that several pastors have taken the initiative to include sex education and reproductive health material in Catechism Classes and Child and Youth sessions. Collaboration with health teams such as doctors, nurses and midwives is also needed to explain the materials mentioned. There are also trainings for assemblies / presbyters so that they can actively be involved in pastoral care for victims. These trainings do not directly address child marriage, but relate to the issues of sexual abuse that are still closely linked to child marriage practices. 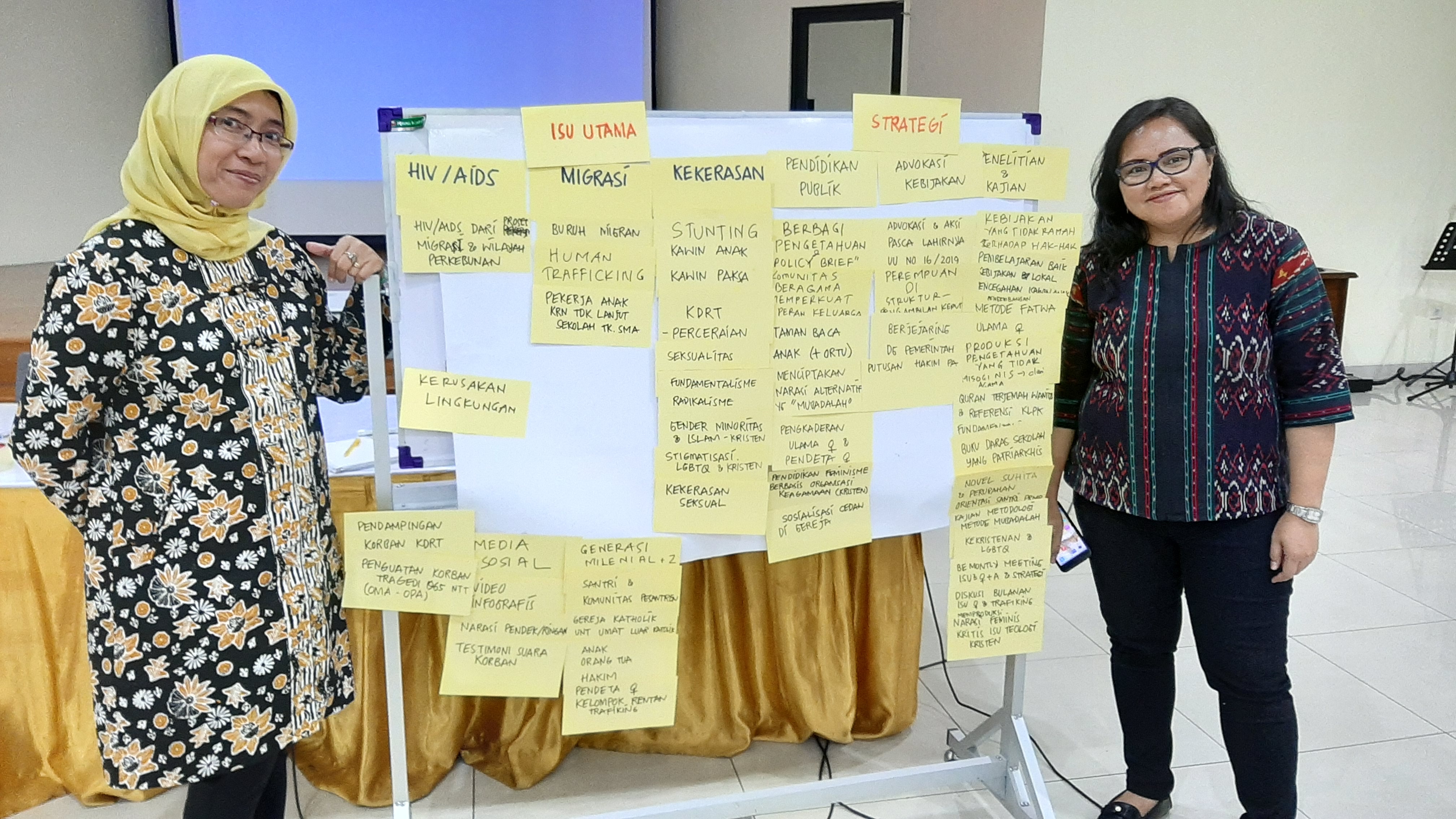 At the discussion, Ruth Wangkay, representing the Network of Women Theologians in Indonesia PERUATI, commented at the exact timing of this seminar, since that day, November 25th, was the Anti-Violence-Against-Women-Day. The anti-violence campaign would last for the next 16 days. The theme of PERUATI for their 16-day campaign was “Breaking the Silence, Fighting Sexual Violence”. Childmarriage is part of. She named a custom called “marriage catch” (kawin tangkap), still practiced in NTT, especially in Sumba. Under aged girls were caught by a group of men to be brought to the house of a future bridegroom. Such marriages are still considered legal. The State does not obstruct and the church will just bless the couples’ marriage. Our friends from JPIT and the Netherlands should seriously consider these problematic matters.

Gayatri Muthari from the Indonesian Conference on Religion and Peace (ICRP) urged the need to put more emphasis on sex education that prioritizes humanity while still paying attention to religion and culture. Culture for instance, often directs that marriage is the legitimacy for sex in order to avoid adultery. But cultures continue to develop.  The word adultery for instance, has different meanings. in Arabic it is related to prostitution, whereas the Hebrew word used in the Bible, is related to a covenant that protects individual rights.

III. ADVOCACY ON PRACTICES OF FORCED AND CHILD MARRIAGE

In her presentation ‘Advocating for public policies on child marriage from a legal and human rights perspective’, Dian Kartika Sari, (Indonesian Women’s Coalition for Justice and Democracy, KPI), described the process and progress of the public policy advocacy regarding child marriage and the amendment to the law on marriage. She referred to her slideshow, which showed the process during the years. Advocacy regarding child marriages started in 2010 motivated by the information of the National Commission on Violence Against Women (Komnas Perempuan) that the suicide rate in Rembang, especially among children to be married, was quite high. After several campaigns including a number of civil society institutions, KPI realized that an adequate approach should involve religious leaders, traditional leaders, and law enforcement agencies. In line with this, they advised the State to give appreciation to those who reject child marriage, with the aim to show to the communities that even though Indonesia did not yet have official regulations prohibiting child marriage, efforts to prevent child marriages themselves were respected by the government.

In the first judicial review, there was more talk by activists. In the second judicial review, women victims of child marriage came forward. Based on the experiences in court, it turned out that the victims’ voices were indisputable. They were stronger than those of the activists. Finally, they could convince the court to accept the proposal to change the law. After the proposed amendment to the Law was approved, Komnas Perempuan provided an academic paper and a draft of the Bill of Law, upon which the documents were offered to the House of Representatives and the Ministry of Women’s Empowerment and Child protection. 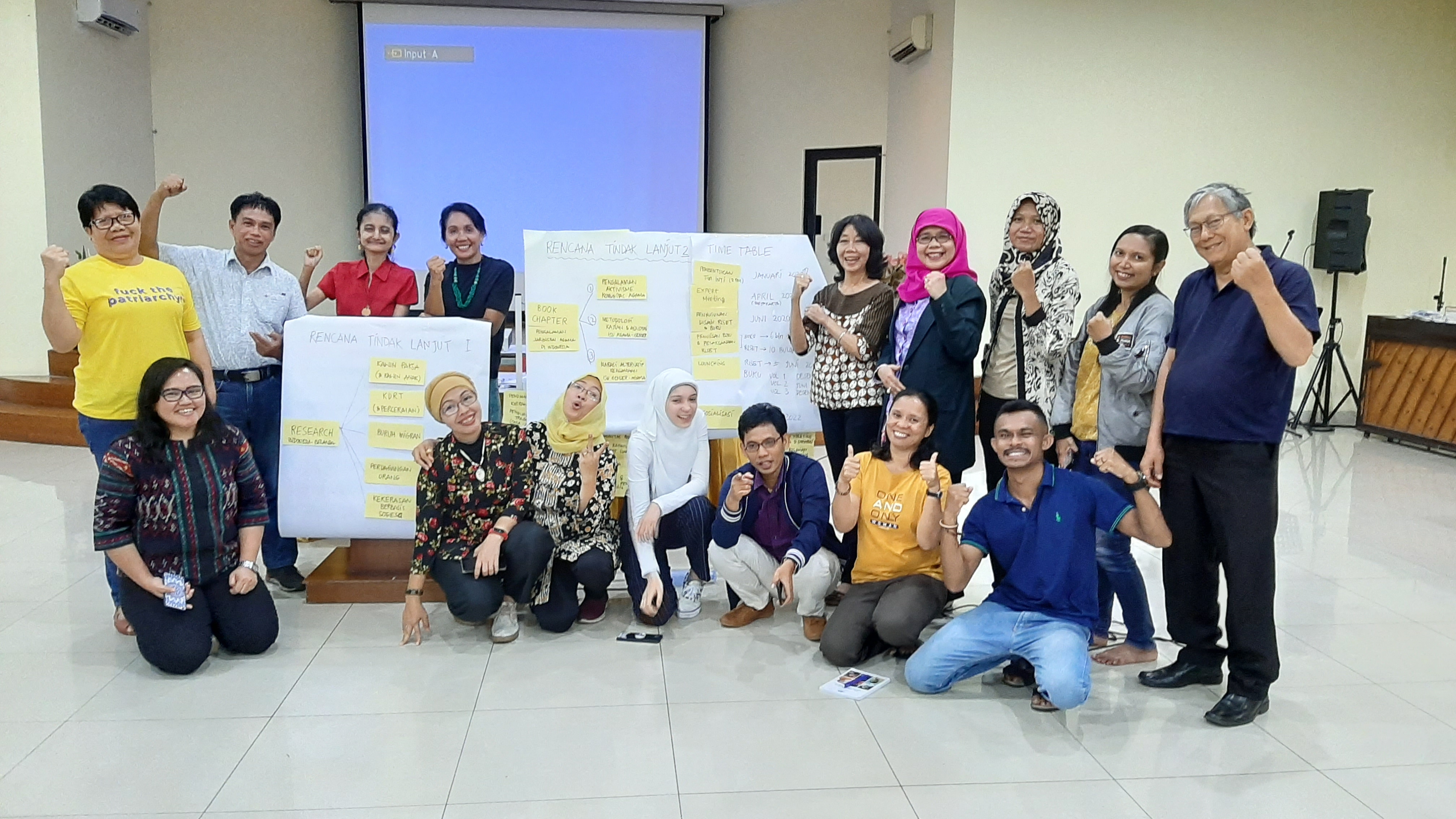 From the participants, Evie Permatasari (Jaringan Aksi Remaja) commented on sanctions affecting the children themselves in the course of law and regional regulations preventing child marriage. These sanctions were detrimental and out of context. Further research on policies due to this Act and regulations should be conducted.

Christine Hutubessy concluded the seminar with the invitation to attend the NICMCR workshop, to be held on the following day. The workshop will offer the opportunity to see what can be done jointly in the future and what we can accomplish together in this very complicated field. She expressed special thanks to the Jakarta Theology and Philosophy Seminary, represented by Stephen Suleeman, for hosting the seminar.