Controversy of love for LGBT in Christian and Islamic texts

Views on religious texts containing sexual and gender-fluid orientations were presented on a special webinar “Why Can’t I Love the One I Love, reviewing Sexual Orientation and Gender-Fluid Expression through the Lens of Religious Texts”, organized by the NICMCR Pokja Gender on November 3, 2021.

Apparantly, the debate about the acceptance of LGBT, whether motivated by religion or not, is far from over and can sometimes turn ugly, both in the Netherlands and in Indonesia. Discrimination and violence against these groups still prevail. Moderated by Nailah, a Muslim gender activist and member of the Center for Gender Studies (Pusat Riset Gender) of the University of Indonesia, four resource persons share their opinions and experiences from Christian and Islamic perspectives, in responding inclusively to the challenges of sexual and gender diversity.

In his presentation, Dr. Ruard Ganzevoort, Dean of the Faculty of Theology and a Professor of Practical Theology at Vrije Universteit Amsterdam, elaborates on the Nashville Statement. This statement, issued by conservative Christians in America, rejecting the different orientations of LGBT people, caused controversies among academics, religious people, humanitarian activists, and the general public in the Netherlands, where a Dutch version was published in January 2019. Ganzevoort states that the content of the Nashville Statement is not something new but more like an affirmation of conservative views on LGBT. Being a pastoral theologian and academic, he wonders what this means to people, already vulnerable, from a pastoral view. Still, although he opposes the statement, but from a different perspective, he can consider the Statement a hopeful sign because it shows that the need to reiterate such a statement and with it manifest the conservative concept of truth, comes out of fear that in reality many ordinary people are in fact becoming more inclusive. Indonesia, for instance, which has always been inclusive, has shown growing distinct conservatism for the last 10-15 years.

This is also more or less acknowledged by Dr. Mufidah Cholil lecturer at Syari’ah Faculty of the State Islamic University (Universitas Islam Negeri – UIN) of Maulana Malik Ibrahim in Malang. She states, that according to The Indonesian Ulama Council (Majelis Ulama Indonesia – MUI), LGBT is considered unlawful as was stated by Ma’ruf Amin (then Chairman of MUI), in a press conference on February 17, 2016. Assessing the situation in Indonesia, Muslims are divided into two major groups. The first group, pro-LGBT, argues from a Human Rights perspective, with its principles of humanity and equality. Islam is the religion of Rahmatan lil alamin, a religion that gives love to all human beings. An example is Prof. Musdah Mulia, an Islamic feminist, who advocates for LGBT rights in Indonesia from an Islamic perspective, though since 2005, she has faced extraordinary challenges and animosities. The theological base of her legitimacy is the verses of the Koran. For example, the historical and contextual interpretation of Surah Al Rum:21, in order to find an inclusiveness of the Qur’an, which accepts the diversity of sexual and gender orientations. Meanwhile, Mufidah Cholil says, counter-LGBT groups use theological based Islamic texts to underline their arguments. The Qur’anic text that is commonly used is the story of the prophet Lut and the immoral acts committed by his people. Also often mentioned are two phenomenal hadiths, the Hadith of Abu Dawud (Jus XIII, 1416/1996: 131) and the Hadith of Sunan at-Turmuzi (Juz. VI, t.th.: 41). 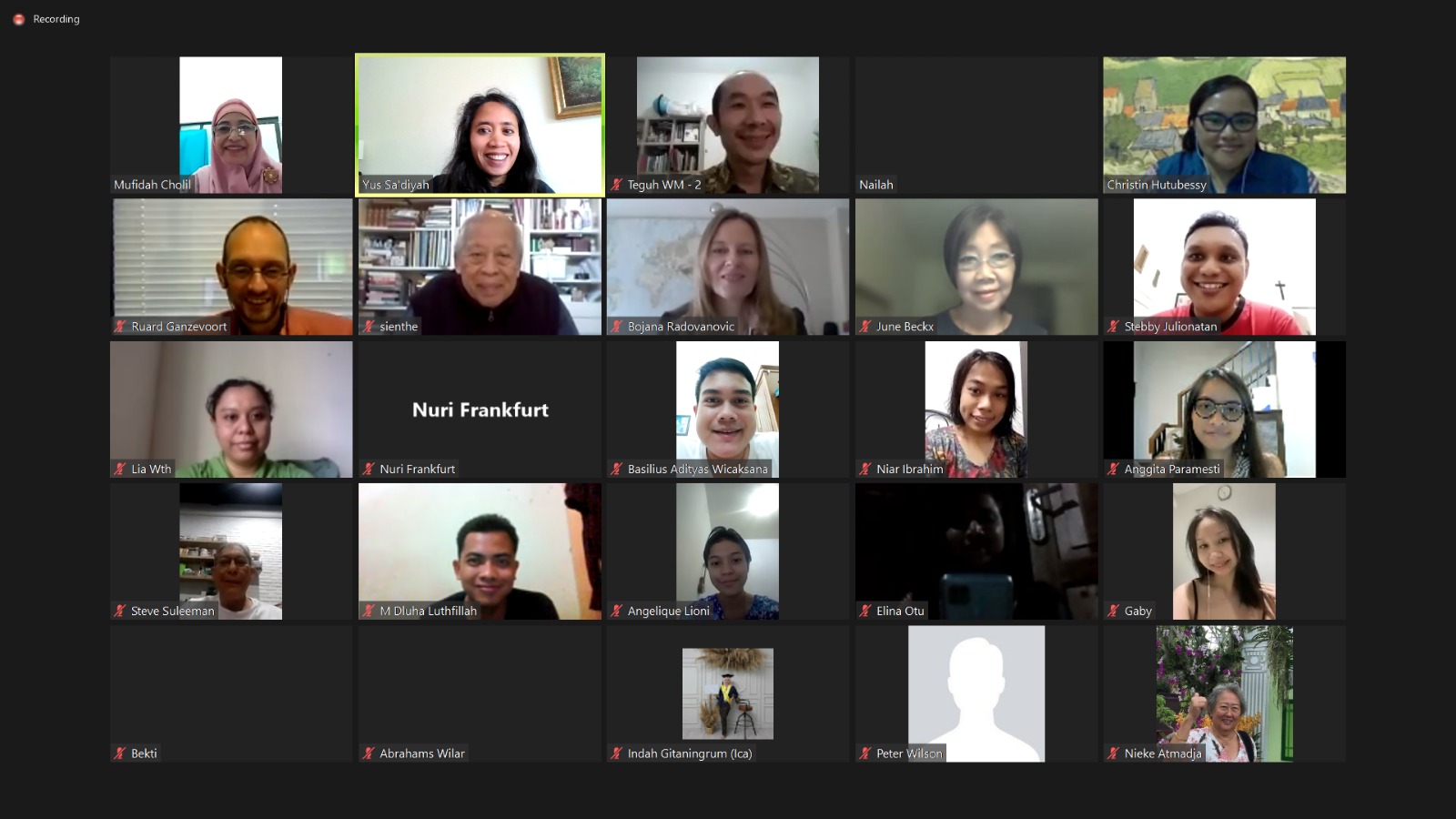 Interestingly, within these conservative groups there is increasing awareness that LGBT’s are part of our society, while the LGBT people themselves are unapologetically clear about their identity, also from a religious perspective. Therefore, Ganzevoort thinks that it is in fact not a discussion about religions, but a global discussion about inclusiveness, polarization and conversation. Mufidah Cholil argues, that the debate is not only controversial in Muslim communities, but also inherent in other religions in Indonesia. But, she says, it is a fact that LGBT people exist in Indonesia and are increasing in number. They should have the same rights and obligations. It is necessary to distinguish between sexual orientation and sexual behavior in addressing issues related to LGBT.

Dominantly conservative in Indonesian Christianity, are the evangelicals, with Pentacostalism and even more, neo-Pentacostalism at the forefront. Yet, in recent years, the growth of studies about affirming evangelicals have significantly increased. Dr. Teguh Wijaya Mulya, lecturer at the University of Surabaya, mentions the SOGIE debates and their significances for Pentacostal Christians. Together with his colleague Amadeo Udampoh from the Gender Research Center of the Jakarta Theological Seminary (STFT), he is presently doing research among affirming evangelicals in Indonesia, particulary in the Pentacostal tradition. A trend has been identified among contemporary evangelicals of being more affirming and possibilities are wide open showing increasing numbers of affirming evangelicals. In terms of the theological Christian debate on LGBT in Indonesia, Mulya admits that we cannot omit the official Pastoral Letter, released in 2016 by the PGI, the largest interdenominational church organization in Indonesia. This statement in favour of and supporting the recognizition and protection of LGBT rights was furiously responded by Christian communities within and outside the PGI. With this pastoral encouragement alongside the research he is conducting, Mulya is optimistic: “There is a plethora of contextual resources, theological institutions and congregations within conservative pentacostal traditions, which can be drawn into advanced affirming positions”.

Fourth and last speaker, Dr. Bojana Radovanović, member of the Faculty of Theology, Philosophy and Religious Studies at the Radboud University Nijmegen, outlines gender and homosexuality in early Christianity from historical perspectives. Radovanović: “With these contemporary debates, of course it is very important to go into the past and to see where it all began, at least regarding Christianity.“ Presenting the topic on “ Fluidity of Gender in Early Christianity and the Middle Ages“, she explores patristic literatures, the texts of early Christian theologians, and the decisions of Christian councils (e.g. the Council of. Elvira in 309, the Council of Ephesus in 431, the Council of Chalcedon (451), the Second Council of Constantinople in 553, and the Council of Lateran in 649). Harsh repression on homosexuals actually started in the middle ages. In ancient Greece and Rome, male and female lovers were considered equal, homosexuality was regarded as an expression of comradeship among warriors and there was no sexual law until late in the Roman empire. The broad acceptance of homosexuality in ancient Mediterranean ended with the coming of Asceticism which is hostile to all sexual behaviours. Radovanović explains the relation of asceticism and transvestism: “Asceticism and its link to gender appear in the allegorical sense of a spiritual quest. We found women who left their marital status and chose the ascetic lifestyle. Sometimes they were often transvestic.” Transvestism was quite common for Christian women of the middle ages so they could even become church clerics. It was later formally banned at the Synod of Gangra, ca 350. The Synod, which was later ratified by the Council of Chalcedon, decided that women were forbidden to perform actions under the pretense of asceticism, such as wearing male clothes etc. Further in history, up to the 8th century, homosexually was equalized with other punishable sexual acts, such as adultery and incest. In the Roman time, ‘heresy’ was a greater threat to the church than homosexuality, although they were seen as one group of sinners.

When at the Q&A session, the speakers were asked for their conclusion and hopes, Ganzevoort invites webinar participants to look at the differences in society wisely: “ We have to acknowledge that the presence of LGBT people is confronting and dangerous for other people because they feel that the world is changing. Let’s engage in courageous conversations because it is the only way, I think of this world as a world with a promising vision on our religious traditions, peace, harmony, acceptance, love and compassion.” Musfidah Cholil points out that webinars or forums are needed to discuss not only LGBTQ issues, but also broader humanitarian issues that have impacted internationally: “Issues of LGBT and other humanitarian issues have affected not only one country, but they have already made impacts on the peace of living together in the world.” Mulya mentions the condemning retorics often used to judge LGBT people, placing them outside the human rights concept. He refers to the importance of cross- references and dialog: “Texts and discourses, as well as real dialogs, conversations or encounters without theological interpretation are needed”, he adds. Radovanović comments that “Conversations on LGBT should be treated seriously from different perspectives. Experts and people or those who live with this on a daily basis, should be involved in this issue.“

IN MEMORIAM: This was the last webinar of the Gender Working Group of NICMCR which was attended by Ps. Stephen Suleeman before he passed away suddenly on Monday, November 8, 2021. Ps. Suleeman actively got involved in the establishment and regular meetings of the Gender Working Group. Suleeman was persistent in his struggle for gender liberation and the fulfillment of the rights of his LGBT friends until the end of his life. The PGI pastoral statement about LGBT, could be issued mainly due to the efforts of the STFT with the amazing pastor Stephen Suleeman as the driving force (Mulya).

In this webinar Suleeman commented that he was working on queer issues and preparing a writing competition for young people under the age of 20 regarding their experiences with queer friends or their own experiences of being queer. His commitment and dedication in constructing a rainbow theology in Indonesia is a historical as well as heroic act that will always be remembered.